In one tab I have all the Hiragana lesson! If you do not know Hiragana, please start there. When teaching Katakana, I assume you're familiar with Hiragana.

Katakana is used for borrowed words. It used more and more frequently these days, however it is merely the seasoning on the meat and potatoes that is Hiragana. Words like "Longsword" (ロングソード), "Dragon" (ドラゴン), "Mummy" (ミイラ - must not be an English borrowed word), and something as common as "Bread" (パン) are written in Katakana because the Japanese either (1) did not have a word for these before the objects were introduced to them by foreigners, or (2) the foreign way of pronouncing the word became more popular than the native way of referring the item.

For an example of (1): Bread was mostly unheard of until Japan began letting a small number of foreigners into the country. The foreigners in question referred to bread as Pan (パン), and thus, bread is called pan in Japanese.

For an example of (2): Milk has existed in Japan for some time, and while there is a native word for milk, the word "Miruku" (ミルク) has become a quite popular way of pronouncing the word.

Because you've learned Hiragana already (...right?), you should be able to learn Katakana a little bit quicker. Thus, each Katakana lesson contains more information to learn. Here are the lessons: 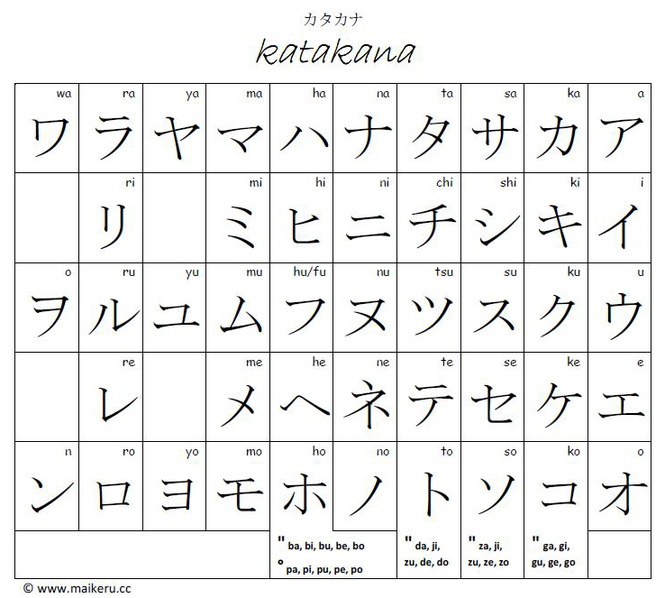 Here is the Katakana chart. I just yoinked this from www.maikeru.cc