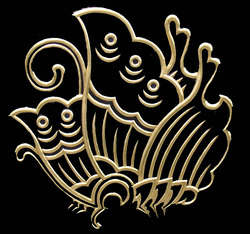 In the 12th century, the Taira became one of the most influential and powerful clans in all of Japanese history. They stayed this way for decades until the Minamoto crushed them at the Battle of Don-no-Ura in 1185. After losing to the Minamoto, the age of the Samurai began.

They were known for their naval expertise, which began when they were employed by the imperial family to hunt down local pirates in the inland sea during the 12th century

The Taira Clan began in 825 when the name Taira was given to Prince Takamune, the grandson of Emperor of Kammu.
Taira Kiyomori (1118 - 1181)
Taira Kyomori was the son of Taira Tadamori. However, it isn't certain whether or they were genetically father and son: the woman that gave birth to him was a concubine of "the ex-emperor's", and she may have already been pregnant with Kiyomori when she was given to Tadamori.
Taira Masamori (?-?)
Taira Masmori is credited with turning the Taira clan into one of wide respect and wealth. He was able to do so in 1108 when he was was appointed by the imperial family to put down the rebellious Minamoto Yoshichika. This was the first step towards favor with the court. He entered the court with the head of Yoshichika on a pike with some 150 people loyal to him. This spectacle helped build support with the public.

He helped the Taira family by subduing pirates in Japan's Inland Sea (the area between Honshyuu and Shikoku).In 1119, he took 100 of his most trusted retainers and came back with a large number of pirate heads. He came to court with men holding the heads of criminals who he had captured and subsequently killed. He was further promoted for triumphing over the pirates, which had been a nuisance to the local provinces. This assault on the

Through this superior naval power, the clan gained handsomely from trade with China and Korea.

He was the father of Taira Tadamori.
Taira Tadamori (1096  - 1153)
Taira Tadamori, son of Taira Masamori, was said to be the one who completed the ascension of the Taira clan to a military and political powerhouse. This ascension paved the way for Taira Kiyomori to perform his exploits.

Much of Tadamori's successes have to do with naval trade with China and Korea, which continued under Tadamori's watch and further benefited the clan. Under this situation includes piracy, smuggling, trade and chicanery.

Tadamori gained his power and respect through suppressing robbers, thieves, and gangs, including the monastic troops of the Tendai and other sects of Buddhism. He also was quite successful in dealing with pirates, like his father was, in the Inland Sea. However, he also sought alliances with some when doing so might make a handsome profit for his clan. He even went so far as to befriend some of the pirate leaders of the time. In fact, many of the local pirates were respectable, wealthy individuals! When they came into trouble with the law, Tadamori would allow them to offshoots or vassals to the Taira. Doing so led him to become the governor of man provinces in the west: Bizen, Mimasaka, Harima and others. His goal was domination of the Inland Sea.

His first major anti-pirate expedition launched in 1129. It was quite successful, but unfortunately conditions were ripe for piracy and, despite being successful, he was made to launch another expedition in 1135. Upon return in 1136, he marched some 70 'pirates' through the streets of Kyoto. However, it turned out that many of them were petty criminals or influential people in western provinces (such as those listed above) who wouldn't submit to his orders. Only about 30 were actually pirates.

Another act of chicanery involved him forging imperial warrants to cover his own misdeeds and aid in his trade with China. These forged documents likely had to do with forgiving the "overlook' of arresting smugglers in the Inland Sea where his clan was dominant. (It is interesting to note that the evidence of the forgery comes from the diary of Minamoto Moritoki, titled Choushyuu-ki). The forgery was to give his clan the power to inspect Chinese trading ships instead of the imperial family, thus allowing the clan numerous benefits in access to foreign trade.

In a bizarre turn of events, an ex-emperor was worried about a goblin, or something to that effect, causing problems in the palace grounds. Tadamori was sent to take care of the situation, and it turned out to be nothing more than an elderly lamplighter. The ex-emperor was nevertheless pleased with his work, and handed over one of his concubines to Tadamori. That concubine gave birth (she may have already been pregnant when the exchange took place) to Taira Kiyomori.