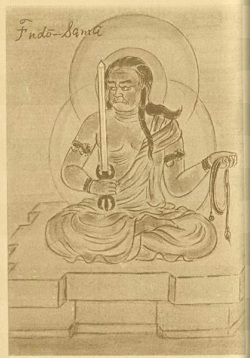 Fudou Myou Ou
Some 400 years ago, in the village called Asamimura, in the district of Onsengouri, in the province of Iyo, there lived a good man named Tokubei. Tokubei was the richest man in the whole district and was the headmaster of the village. He was very fortunate in life, but he had never known the joy of fatherhood despite being 40 years old. Therefore, he and his wife began praying over and over to Fudou Myou Ou (Acala, in English), who had a famous temple nearby called Saihouji*.

Their prayers were answered, and his wife gave birth to a daughter. Her name was to be Tsuyu. However, due to a deficiency in her mother, O-Tsuyu needed a milk-nurse, whose name was O-Sode.

O-Tsuyu fell ill when she was fifteen, and it appeared that she was to die. O-Sode, who loved O-Tsuyu as though she were her own child, went to Saihouji and prayed fervently to Fudou-sama**. She went there every day for twenty-one days, and finally, O-Tsuyu recovered.

Everyone at the house of Tokubei rejoiced, and he gave a great feast for everyone there. But on the night of the feast, the milk nurse suddenly fell ill. The next day, when the doctors came, they declared that she was dying.

The family gathered around her to say their final farewells. She told them all, to their shock, that her prayers had been heard and answered. She had been praying to Fudou-Sama at Saihouji all this time that she would be allowed to die instead of O-Tsuyu. "And this great favor has been granted me. Therefore, you must not grieve over my death, instead grant me my last wish: I promised Fudou-Sama that I would have a cherry-tree planted in the garden of Saihouji. Go there and plant the tree for me." And with this, she passed away.

The family, after the funeral, went to Saihouji and planted a cherry-tree, as was asked. It grew to be strong and healthy, and on the 16th day of the second month every year - the anniversary of O-Sode's passing - it blossoms. The blossoms are pink and white, like the breast of the milk-nurse. The people called the tree Ubazakura, the Cherry-tree of the Milk-Nurse.
*I can't seem to be able to locate this 'famous’ temple, nor the village.

**Fudou-Sama is the same being as Fudou Myou Ou. The "Sama" is a very honorable ending put after someone's name to designate a high level of respect.