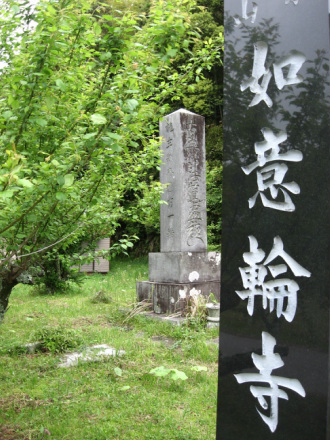 A modern day example of Japanese tombstones
In the city of Niigata, in the province of Echizen*, lived a man named Nagao Chousei. At an early age he was betrothed to a girl named O-tei, the daughter of his father's friend. They were to be married once Nagao finished his studies, but, unfortunately, O-tei was a bit weak and became fatally ill when she was 15 years old.

When she realized she was not long for this world, she told Nagao that she was going to perish. He reassured her that she would be fine, but she insisted that, even if she were to become healthy again, her body was so frail that she would merely cause problems again in the future. She told him that they would meet again.

"This I cannot do. But, I am certain that if you wish to receive me, then I shall be able to return to you" were her last words before she passed.

He had been very attached to her, and his grief was strong. He built for her a mortuary tablet* inscribed with her zokumyou** and placed the tablet in his butsudan**. Every day he set offerings to her before it.*** He thought about her last words every day, and wrote a solemn oath that he would wed her if she were to ever return to him. He sealed this promise and placed it next to her tablet.

However, being that Nagao was an only son, it was necessary that he should marry. He finally gave in to his obligations to his family and accepted a wife that his father had chosen. He still left offerings to O-tei's tablet everyday. As time went on, his promise to marry her again stayed true, though he found himself more and more unable to remember what she had looked like. Over the years many tragedies befell Nagao: his parents passed, and so did his wife and his only child.

To forget his sorrows, he set off on a solitary journey away from his desolate home. After months of travels, he came to a mountain-village called Ikaho****, which is still, today, known for its hot-springs (map). At the inn at which he stayed, his waitress caught his eye. His memory of O-tei came flooding back into his mind, for, she looked just like her. He couldn't believe he wasn't dreaming. Everything she did reminded him of her.

He finally had to ask her "What is your name, where do you come from? You remind me so much of someone I once loved."

To which she replied, in an unmistakable voice of the dead -- a whisper from beyond -- "My name is O-tei and you are Nagao Chousei of Echigo*, my promised husband. Seventeen years ago I passed away in Niigata, and you promised me in writing that you would marry me if I returned. You sealed your letter and left it on your butsudan."

After the words left her mouth, she passed out unconscious. Upon being revived, she had no memory of saying such things, and no memory of any of the events she had described. Nagao married her as soon as was possible, and they lived happily together for the rest of their years.

...though, she never was able to remember the words she spoke when they first met.
*SPOILER ALERT - Read this once you've completed the story!
In Lafcadio Hearn's account of the story - his may be the only account of this story; I have yet to find another version elsewhere - Nagao is originally described as coming from Echizen (越前国). However, at the end of the story, the waitress tells the reader that he came from Echigo (越後国). Lafcadio Hearn doesn't explain this discrepancy. There are two possible resolutions for this anomaly: (1) He made a mistake, or (2) the mistake was intentional.

(1) If this were merely a mistake, then the correct location would be Echigo province, where the city of Niigata is located.

(2) If the mistake was intentional, it would be an example of a pun in Japanese literature (which is quite common, and was a well respected thing to do). Zen and Go have opposite meanings: Zen means "before" or "earlier, and Go means "Later" or "After". Thus, when O-tei speaks later in the story (after her death), she says that he is from EchiGO, and when she is first introduced (before her death) they are both from EchiZEN. Thus, BEFORE she dies, they are from EchiZEN, and after she comes back to life - the "after O-tei" - they are from EchiGO. Also, the Zen and Go might refer to his journey through the land, or their journey together as a couple, or any possible meanings.

In forms of poetry like Haiku, puns are expected and appreciated. This very well could have been an intentional mistake.
**Mortuary tablets are stone tablets that are placed in a household's butsudan, which is a shrine dedicated to a family's deceased loved ones.

Lafcadio Hearn provides this quote: "The Buddhist term zokumyou ('profane name'), signifies that personal name, borne during life, in contradistinction to the kaimyou ('sila-name') or homyou ('law-name') given after death - religious posthumous appellations inscribed upon the tomb, and upon the mortuary tablet in the parish-temple. - For some account of these see [Lafacdio Hearn's] paper entitled, 'The Literature of the Dead', in 'Exotics and Retrospectives'."
***Although the image to the left does not depict a butsudan, offerings are still frequently left on tombstones for deceased loved ones. In my own experience, I noticed beer, golf clubs, baseballs, baseball gloves, flowers, and incense that would last for a long time to be quite common. Here are a few images that I took.

... I hope that the photographs won't offend the deceased...
****In Lafcadio Hearn's original story, he writes "Ikao". This is likely either (1) a typo, or (2) a mild mistake on his part. If the case is (2), then the explanation is that he was worried that the pronunciation might be mistook by native English readers if he were to write Ikaho. His stories don't use any of the more modern Roomanji systems, and thus it is difficult to know exactly what he means sometimes. However, Ikaho, which is in Gunma-ken and is definitely known for its hot springs, is somewhat between/near both Echigo and Echizen, this is likely the location he meant.