A map of Japan during the latest Ice Age.
Who are the Japanese?
Pre-history
30,000+ BC

When you are asked “where does your family come from”, what is your answer? Of course, all humans came from Africa -- an overwhelming amount of scientific data proves this -- but this very literal answer doesn't quite answer the spirit of the question. Really the question is asking about your family’s history between the creation of the being called Homo Sapien and the present.

In US history, it is fairly easy to identify who “Americans” are. Most living US citizens today came from Europe, Africa, or some other continent. Most of us living today actually know which countries our heritage generally comes from -- my family comes from Italy, Germany, and Romania. We also generally know who the first people to come to the Americas were. Although they likely didn't have an official “history name”, the people came from Asia to North America over a now-melted ice bridge that connected modern day Russia to Alaska.

However, who were the first Japanese? This question is a bit of a daunting question, as it seems that, similar to America, there were more than one mass migration to the Japanese islands.

The earliest evidence of humanity on the islands of Japan date back around 35,000 BC and earlier, during the Paleolithic culture. The first humans to enter Japan possibly could have come as early as 200,000 years ago (although that would be extremely unlikely), while the earliest human remains in Japan date to about 16-12,000 BC.

People came to Japan over land and ice bridges that existed during the last ice age. The paths taken seem most likely to have been through (modern day) Korea, Southeast Asia, and Southeast Russia.

It appears that Japan’s pre-history includes some of the world’s first stone tools. Whereas stone tools are mostly dated at 10,000 BC in the world, Japan’s prehistory has tools that are dated to 28-18,000 BC.

The first largely discussed group of people discussed in Japanese history are the Jomon people, whose history is generally discussed starting at the end of the last Ice Age, around 11,000 BC. 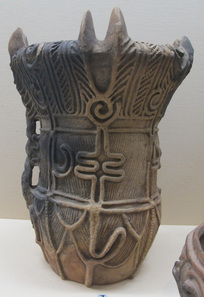 Notice the cords decorating the pottery
Jyoumon 縄文 - most commonly written "Jomon" in English.
13,000 BC - 300 BC.

Although humans lived in modern day Japan at least 30,000 BC, the first substantial culture discovered comes from about 14,000 BC. The people in Japan at these times are known as the Jomon.

The Jomon people are named after the type of pottery that they made. The Jomon people used cords of clay to decorate their pottery. The word jyoumon means “cord marked” in Japanese. As you can see in the image, the pottery clearly has cord like decorations upon it.

The Jomon people in Japan are believed to be the “stranded” people of asia who were stuck on Japan when an ice bridge between the mainland asian continent and Japan began to melt. When the world began to warm, they were still on the islands of Japan. Jomon culture actually began before the ice age ended.

Sometime between 4,000 and 300 BC, the final stage of the Jomon period, the people began making doguu (usually written Dogu in English), which were clay figurines of humans and animals. Some of the most notable dogu figurines are of women with exaggerated figures. (an example of dogu can be found in the heading of this webpage)

Modern day Japanese (Wajin, as they are sometimes called) are said to have 10-20% of their genetic code come from those people in the Jomon period, with the rest coming from waves of immigration during the Yayoi period.

It seems that those who today call themselves the Ainu have the greatest claim to being the original inhabitants of Japan. Genetic evidence traces their heritage back to the Jomon people.

The first emperor of Japan, Emperor Jimmu, supposedly was born on February 13th, 711 BC, and ruled around the year 660 BC. However, there is absolutely no record of him outside of a document written in 700 AD (some 1400 years after his birth). Most historians believe that he was largely a fictional character. Emperor Jimmu claims descent from the Sun Goddess, Amaterasu (no, not the wolf thing. This isn't anime). He conquered the area around today's Mie Prefecture. While Emperor Jimmu is the first emperor (who cannot be verified), the first verifiable emperor is the "10th" emperor, Emperor Suijin, during the Yamato Period. 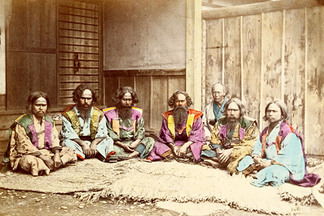 Some Ainu from the 1860s
The Ainu (Also: Aynu, Aino, Ezo and possibly the Emishi) living today can most likely claim that their heritage is the oldest heritage in Japan. Their heritage most likely does trace back to those from the Jomon period. Other Japanese today are less likely to be able to claim this heritage, and their ancestry likely flows to later mass migrations from the mainland to Japan (during the Yayoi, for example). The Ainu can be loosely thought of as the Native Americans of Japan. Unfortunately, the histories of both groups are similar.

Today, the Ainu mostly live towards the North of Japan on or near Hokkaido, however they historically lived throughout the Sakhalin and Kuriles Islands (which are no longer Japanese territory).

Although this hardly matters, it was believed throughout much of the 20th century that the Ainu stemmed from the Caucasoid family of humanity (i.e., Caucasian , however this has largely been disproved.  There is quite a bit of genetic evidence that the Ainu are of the Mongoloid family. Believe it or not, one of the major reasons for thinking that the Ainu were/are Caucasian came from the fact that they’re a bit more hairy than other Asian races. Books printed as late as 2012 are still making the false claim that the Ainu are Caucasian (I don’t mean this to be insulting, I merely wish to point out that the claims of Ainu being Caucasian have been thoroughly ingrained into the minds of historians).

Hokkaido has been populated since the Paleolithic period of history. It appears that the Ainu descend from a group of people largely called the Jomon, a group of people who are believed to be the first to migrate to Japan. This claim is based on genetic testing of both current living Ainu people and DNA excavated from Jomon burial sites (the important part is towards the bottom of this article). Also, in Southern Hokkaido, there are prehistoric remains of Jomon culture at over 600 sites.

Unfortunately for the Ainu, their history in Japan is largely one of subjugation. The “Wajin” - those individuals who are largely identified as “Japanese people” (they have also been called the Yamato Minzoku. The Wajin will be discussed later) - slowly pushed the Ainu further and further North.