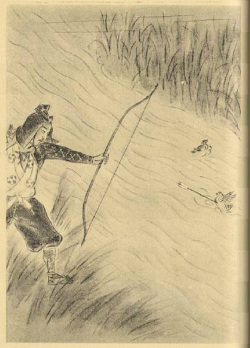 In the old province of Mutsu, there was a falconer and hunter named Sonjyou. While out hunting one day, he came across a pair of oshidori (mandarin ducks), a male and a female, swimming together in a river. Oshidori have been known for a long time in the far east as animals that should not be hunted; they are regarded as symbols of the love between married couples.

However Sonjyou was very hungry and had no other food, so he readied his bow and took aim. He shot his arrow and killed the male duck, which sent the female fleeing for cover. Sonjyou took the dead bird home and cooked it for dinner.

That night, after falling asleep, he had a strange dream of a beautiful young woman coming into his room.  She stood by his pillow and wept. Her sobs of anguish tore through his heart. He went to the woman to ask what was the matter. She replied that she and her husband were so happy together, that they were living peacefully together, until Sonjyou came and shot her husband dead. "What harm had he ever done to you, Sonjyou?", her tears pierced the marrow of his bones. "I will not be able to live without my husband; you've killed us both. I came here tonight only to tell you this..."

And she spoke to him a poem highlighting the misery that he had bestowed upon her.* "Tomorrow, when you go to Akanuma, you will see what you have done to me..."

The dream ended with her weeping on her way back out the door. Sonjyou awoke the next day with the wild dream stuck in his mind. He resolved to go to Akanuma to see if the dream was an omen, or merely his imagination getting the best of him.  He packed up and traveled to Akanuma. Just outside of the town, he came to the river bed and saw a female oshidori. She saw him back.

It flew directly towards him, with her eyes fixated upon him. He was caught off guard in awe. However, instead of attacking him, it used its beak to rip itself open, committing suicide.

Sonjyou then and there chose to shave his head and become a priest.
*I'm not including the poem here for fear of any sort of plagiarism claim. It is included in the book linked above - I really do highly recommend it. Remember when reading poems of import in old Japanese that puns are everywhere. Lafcadio Hearn does a great job pointing out the pun in the book.