Of A Mirror and A Bell 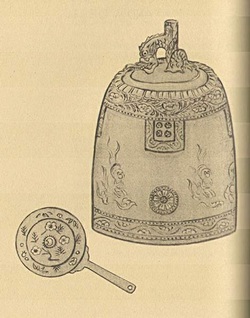 It is known - to those who go out hunting for old abandoned shrines and temples - that shrines and giant bells go hand in hand. I, personally (Evan, that is, not Hearn) encountered a few without even really trying. Sometimes you have to look around for a hidden stairway that hasn't been cleared out in years to find them, but they are likely there.

Some of the older bells were made by smelting down the metal of bronze mirrors that the local parish-women would donate. During the times of Lafcadio Hearn (who passed in 1904), there were apparently still temples that had heaps of yet unmelted mirrors. Hearn points specifically to a Jyoudou Sect temple in Hakata in Kyuushyuu. The mirrors there were, apparently, going to be used to make a statue of Amida thirty-three feet high.

One other such bell was in Mugenyama, in the province of Toutoumi. The priests were hoping to build a large bell for their temple. Many women obliged, including a young woman who was a farmer's wife.

After she donated her mirror and returned home, she regretted throwing it into the heap -- it had been an heirloom passed down from generation to generation. She remembered the moments she had spent with her mother and grandmother sitting before the hand mirror. She had remembered all of the other nostalgic memories she had shared with that mirror.

She could have asked for the mirror back if she were to pay for it, but she did not have the money necessary. She recognized her mirror in the heap each and every time she went to the temple because of the Shyou-Chiku-Bai * emblem that adorned the back. She thought about hatching a plan to steal the mirror back, however the chance never came.

It felt like she had given away a piece of her life. She thought about the old Chinese proverb that a mirror is the soul of a woman -- indeed, on the back of many mirrors the character for "soul" is printed -- and she began to worry that perhaps the proverb was a bit too accurate.

The mirrors were finally sent to the foundry to be smelted down, however the smelters discovered that there was one mirror that just wouldn't melt. After numerous attempts to melt the mirror, they finally gave up. The knowledge of this became public, and people began to realize that it was hers. They knew that her mirror wouldn't melt because she had not honestly given the mirror away with all her heart, and that she must have a selfish soul.

The shame became too much to bear and she drowned herself. She left behind a farewell letter: "When I am dead, it will not be difficult to melt the mirror and to cast the bell. But, to the person who breaks that bell by ringing it shall be given great wealth from my ghost."

The last wish or promise of anyone who dies in anger, or performs suicide in anger usually has supernatural force.

After she died, the mirror melted and was indeed added to the bell. Determined to earn the ghost's wealth, the people lined up the very day that the bell was hung in the temple's court. They each tried their hardest trying to break the bell: day after day, hour after hour, people were furiously clanging the bell. The priests could no longer endure such annoyances. They tried to stop everyone, but the greedy desire for wealth caused the bell to be a curse rather than a blessing.

The priests threw the bell down the hill and deep into a nearby swamp. It was lost, and it was slowly forgotten. Those who knew of it referred to it as Mugen-Kane - the Bell of Mugen. 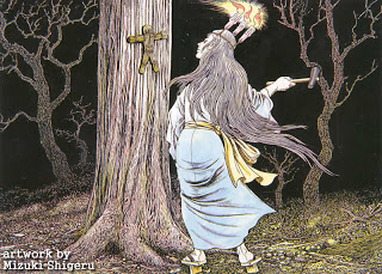 -- Now, to fully understand what happened next, it is important to understand the Japanese term nazoraeru, which is loosely translated as "to substitute" or "compare" or "liken". It is when one action or object is substituted for another so as to bring about a miraculous result. There are a few types of nazoraeru, and Lafacdio Hearn gives a few examples.

One cannot afford to build a Buddhist temple. However, one can easily lay a pebble before a statue of Buddha with the same pious feeling that would prompt one to build a temple would you have been rich enough to do so.

One cannot read all six thousand, seven hundred and seventy-one volumes of the Buddhist texts. But one can make a revolving library containing them all, and push it earnestly and with piety to make them spin as though you were attempting to read them with the same merit. These first two examples would be the religious meanings of nazoraeru.

If one were to make a little man of straw, an effigy of someone, and nail it with nails not less than five inches long to a tree in a temple-grove at the Hour of the Ox**, the person may soon die thereafter. This would be one kind of magical meaning of nazoraeru.

Or if someone were to sneak into your house and steal your valuables, and you discovered their footprints in the mud, you might burn a very large moxa on each of them. In this way the soles of the feet of the robber would become inflamed and will allow him no rest until he returns of his own accord to put himself at your mercy. These two examples would be another kind of the magical meaning nazoraeru.

However, the conclusion of this story illustrates the third meaning of nazoraeru.

After the bell had been rolled into the swamp, there was no hope of ever breaking it by ringing it.

However, one woman, Umegae, who was known in Japanese legend due to her relation to Kajiwara Kagesue, a warrior of the Heike clan, found a way to break the bell. While she was traveling with Kajiwara, they were in need of money. She took a basin of bronze and mentally represented it as the bell, and beat upon it until it broke while crying out that for 300 pieces of gold. A guest at the inn, who was troubled by the loud noise, came to find out what the racket was all about. Upon learning the story, he presented her with 300 ryou.

A song was made about Umegae's basin of bronze. It was sung, at least up until the days of Lafcadio Hearn (some 100 years ago) by, as he put it "dancing girls":
Umegae no chouzubachi tataite
Okane ga deru naraba,
Mina san miuke wo
Sore tanomimasu
"If, by striking upon the wash-basin of Umegae, I could make money come to me, then would I negotiate for the freedom of all my girl-comrades."

After this happened, the fame of Mugen-Kane became to the point where many people emulated Umegae's actions. A dissolute farmer who lived near Mugenyama, on the bank of Oigawa, made a clay bell of the same sort. He had wasted all his money by making poor decisions and spending wildly. Desperate for money, he broke his clay bell while asking for great wealth. A woman clad in white rose from the ground before him. She handed him a jar and then disappeared. He rushed to his house, told his wife, and they opened it together.

Together, they found that the jar was filled to the very brim with...

...No! I can't tell you what was inside!
*A shyou-chiku-bai is an emblem that includes pine trees, bamboo and plum flowers. The design itself varies from object to object.

*Ancient Japanese hourly time was divided just like the years in the "Chinese Zodiac". Each animal's hour would actually be the equivalent to two hours. Thus, the hour of the ox would have been between the hours of 2 a.m. and 4 a.m.