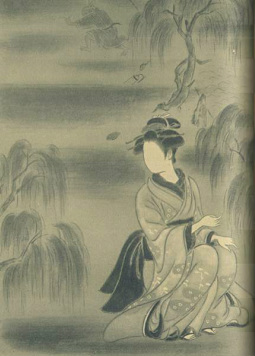 Before I begin, let me re-iterate that this is a direct copy from Lafcadio Hearn's book (link above). This story is very well known among Japanese children even today. This is probably the only Hearn story that I've yet encountered where even the young children I teach know the ending and general plot.


On the Akasaka Road, in Tokyo, there is a slope called Kii-no-kuni-zaka,-- which means the Slope of the Province of Kii. I do not know why it is called the Slope of the Province of Kii. On one side of this slope you see an ancient moat, deep and very wide, with high green banks rising up to some place of gardens; -- and on the other side of the road extend the long and lofty walls of an imperial palace. Before the era of street-lamps and jinrikishas, this neighborhood was very lonesome after dark; and belated pedestrians would go miles out of their way rather than mount the Kii-no-kuni-zaka, alone, after sunset.

All because of a Mujina* that used to walk there.

The last man who saw the Mujina was an old merchant of the Kyobashi quarter, who died about thirty years ago. This is the story, as he told it:

One night, at a late hour, he was hurrying up the Kii-no-kuni-zaka, when he perceived a woman crouching by the moat, all alone, and weeping bitterly. Fearing that she intended to drown herself, he stopped to offer her any assistance or consolation in his power. She appeared to be a slight and graceful person, handsomely dressed; and her hair was arranged like that of a young girl of good family. "O-jochu"**, he exclaimed, approaching her,-- "O-jochu, do not cry like that!... Tell me what the trouble is; and if there be any way to help you, I shall be glad to help you." (He really meant what he said; for he was a very kind man.) But she continued to weep,-- hiding her face from him with one of her long sleeves. "O-jochu," he said again, as gently as he could,-- "please, please listen to me!... This is no place for a young lady at night! Do not cry, I implore you! -- only tell me how I may be of some help to you!" Slowly she rose up, but turned her back to him, and continued to moan and sob behind her sleeve. He laid his hand lightly upon her shoulder, and pleaded:-- "O-jochu! -- O-jochu! -- O-jochu!... Listen to me, just for one little moment!... O-jochu! -- O-jochu!"... Then that O-jochu turned around, and dropped her sleeve, and stroked her face with her hand; -- and the man saw that she had no eyes or nose or mouth,-- and he screamed and ran away.

Up Kii-no-kuni-zaka he ran and ran; and all was black and empty before him. On and on he ran, never daring to look back; and at last he saw a lantern, so far away that it looked like the gleam of a firefly; and he made for it. It proved to be only the lantern of an itinerant soba (noodle) seller, who had set down his stand by the road-side; but any light and any human companionship was good after that experience; and he flung himself down at the feet of the soba-seller, crying out, "Ah! -- aa!! -- aa!!!"...

"Kore! kore!" roughly exclaimed the soba-man***. "Here! what is the matter with you? Anybody hurt you?"

"-- Only scared you?" queried the peddler, unsympathetically. "Robbers?"

"Ha Ha!! Was it anything like THIS that she showed you?" cried the soba-man, stroking his own face --which therewith became like unto an Egg... And, simultaneously, the light went out.
*A mujina is apparently not specifically a faceless ghost. It is another word for a raccoon dog, aka a tanuki. The proper word for the faceless ghost is noppera-bou.

*Ojyouchu was apparently an older way of addressing a woman you didn't know. The students I tutor today inform me that they think the word actually is supposed to be "Ojyouchan"

*** Soba is a type of noodle made from buckwheat. It's pretty good!