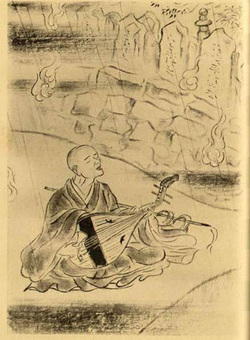 The famous last battle between the Taira (Heike) and Minamoto (Genji) clans was fought at Dan-no-ura, in the Straits of Shimonoseki (the water gap between Honshyuu and Kyuushyuu). The Taira lost, and everyone was killed - women children and even the child emperor, Antoku Tennou. The area has been haunted ever since by the ghosts of the Taira. On dark nights, the area lights up with thousands of small Oni-bi, demon-fire, that float around the water. During windy nights, one can hear the clamor of battle as the Taira fight on.

The dead Taira used to be much more restless than they are today, however. The dead used to rise out of the water at night and sink ships, or drown swimmers. To appease these restless dead, the Buddhist temple Amidaji was built at Akamagaseki. In addition, a graveyard was erected near temple on the beach with the name of Emperor Antoku and his loyal retainers and Buddhist services were also performed on behalf of the spirits. However, the spirits were not completely appeased and still cause trouble to this day.

Near Akamagaseki, a blind boy was born, named Houichi. He grew up to be a fantastic biwa player, and his renown became widespread. One day a priest at Amidaji invited him to give a performance. He accepted and wowed the crowd over, despite being unable to see. He was invited by the priest to stay and live at the temple in exchange for the occasional performance. Houichi accepted - he wasn't the richest of fellows - and lived there for many years.

One night, the priest had to attend his duties for a local man who passed away and had to leave the temple. It was a hot, sticky night and, unable to sleep, Houichi stayed awake outside practicing his biwa well beyond midnight. While practicing, he heard footsteps crossing the garden towards him. He could hear clearly the sounds of armor. The person stopped directly in front of Houichi and, in a deep, commanding voice, yelled "Houichi!"

"Hai!", yelled the blind man, startled. "Pardon me, I am blind and cannot know who calls me!"

"There is nothing to fear", said the voice. "I have been sent by my master to ask you to come play for him and his assembly, who are staying in Akamagaseki. They wished to see Dan-no-ura, and, while there, heard of your skill and talent. They came all the way here to listen to your performance. He desires to hear you play about the history of the Taira."

Houichi couldn't refuse a samurai - doing so would mean death. He prepared himself and allowed the iron-clad samurai to take him to awaiting audience. It was a long trip, and the samurai moved swiftly. They eventually arrived at a large gateway and Houichi could hear shouts of orders to open the gates. However, had a building nearby built large gates? The only large gates nearby that he could remember were those of Amidaji, from whence he had just come.

Upon entering, he could hear hundreds of feet scurrying around, silk clothes moving about, and the speech of high-ranking women in the area. He was told to make himself at ease, and found a pillow to kneel upon. He tuned his instrument and prepared himself mentally. He heard an announcement from, likely, the master of ceremonies, that the history of the Heike was to be recited. However, this would take days, and Houichi asked which specific story would they like to hear.

Houichi lifted his voice and chanted the fight of the sea. He flawlessly told the story of the battle, and he could hear the people talking while he was playing. They had never heard such mastery before. His description of the death filled the room with silence. And he brought the room to tears when telling about the women and children committing suicide in the waters to avoid being taken by the Minamoto.

When he was finished, the room was silent. Finally the master of ceremonies gathered enough courage to tell both the audience and Houichi that his skill was clearly unparalleled. Houichi was asked to come every night for the next six nights to perform. However, he was asked to never speak anything about this performance to anyone, as it might be dangerous for the master if his enemies caught wind that he was out travelling. He agreed and was escorted back to the temple.

No one at the temple had noticed him missing, and the next night the same samurai came to escort him back to the audience. After another rousing performance, he returned. However, this time, he had been noticed. He was asked what he was doing out so late at night, to which he lied. The next night, however, the priest had asked someone to watch him. He was escorted out to the audience again that night, and the priest's servant, had seen his travels.

The servant was shocked to see that Houichi was sitting alone in the cemetery near the beach of Amidaji - the very temple he had been staying at - playing his biwa furiously with countless ghostly lights hovering about. The servant rushed to him and attempted to rouse him from his performance, but to no avail. More servants came and finally were able to drag Houichi back to the temple.

The next day, the priest demanded an answer. Houichi realized he could no longer keep up the charade, and informed everyone of what had been happening. The priest told him of what had really been happening - that his skillful playing had aroused the attention of the spirits; that he had not been playing in a grand theater, but in a cemetery in front of the gravestone of Emperor Antoku; that, by obeying their desires, he was put under their spell; and that he was surely, one night, to be torn asunder by the ghosts if he kept obeying them.

The priest demanded that Houichi have the text of the holy Buddhist sutra Hannya-Shin-Kyou* to protect him from the dead. The priest made sure his acolytes knew what to do, and then informed Houichi that he had more priestly duties to attend to in the nearby village. The acolytes stripped Houichi and painted the text all over Houichi's body. He was then instructed to say nothing and sit perfectly still in meditation no matter what happened that night.

Again, the samurai came to take Houichi to the audience. He yelled in his deep voice for Houichi, but he kept his courage and said nothing.  Again and again the voice called to him, each time angrier and angrier. He could hear the samurai entering his room and looking around for him.

"Here is the biwa, but there is no player. What must have happened to Houichi? I can only see two ears!", said the samurai. Regrettably, the acolytes had written the sutra all over Houichi's body, save his ears. "I suppose I must take these to my master as evidence that I did my duties as well as I could."

The samurai took out his knife, and cut off Houichi's ears. Despite the pain, Houichi managed to not scream out in agony. The samurai then left the room.

The next morning, the priest came back to the temple and found blood coming from Houichi's room. He entered and found Houichi sitting there alone, with blood trickling down from his head. He called for the doctors to take care of Houichi's wounds as he lamented that, had he stayed in the temple to perform the task of writing the holy texts, as opposed to letting his acolytes do it, this whole mess would not have happened. "It's all my fault", the priest said repeatedly.

Houichi healed as best as he could under the care of some of the best doctors. His story spread wide and far. People came from far away distances to hear him play, and nobles from across the country came to pay to hear his performances. He became quite a wealthy man.

But he was forever known as mimi-nashi Houichi - Earless Houichi.
*See Hearn's book and translation for more information about this sutra. This document is referred to as "the smaller Pragna-Paramita-Hridaya-Sutra in other languaes.